The Experimental Theory Experiments Symposium will take place on Friday March 16 from 2 to 7pm, at CityStudio Victoria on 742 Johnson St in Victoria, B.C.

This half-day symposium seeks to explore current approaches to theory that are experimental in nature. Experimental Theory is theory unbounded by standard notions of applicability nor is it restricted to deductive logic as defined by a movement from the general to the particular. It strives towards an open experience of thinking.

An extreme case of intertexuality, or a virtuoso performance of poetricks, a cento is a poem exclusively composed with excerpts from classical and recognizable poems. Additional constraint: excerpts must not exceed one line and half, must be longer than a line. Now, recount the Creation of the world using only Virgilian lines, pray to the Virgin with Ovidian hemistichs or describe, with precision, a passionate sexual intercourse with epic lines. A transformative tool for cultural appropriation, the cento could also be the most boring academic exercise. Now, the practice is intertextuality in action: a theory made text. It disappears as such when the theory of literature abandons the classical tradition: not a coincidence, I think!

Hélène Cazes is a Professor at the French department and directs the program of Medieval Studies at the University of Victoria. Her research on transmission and reception of the literary heritage of the Classics led her to observe, analyze and experiment the alchemy of centos for her doctoral thesis. 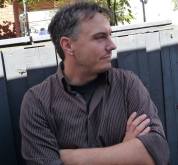 Communication is the alibi of poiesis, but the opposite is true too: one can only insist that poiesis precedes communication to the extent that one accepts that alibis are not superfluous, but work instead according to the weird multi-directional causality of supplements.

In the context of professional sport, it is because the poiesis of the game—which is inclusive of its mediations and receptions, its histories and its futures—is immanent to the communicative operations that lend it internal consistencies that a sensitive player can hear ‘systematically.’ A given moment in a game is, like a murmuration of starlings, a system on the edge, ready to be completely transformed in an instant; a sensitive player possesses cyborg televisual capacities that afford a position analogous to that of the scientist who sees a murmuration as a phase transition. The phase transition is possible because everything is connected, but also because there is something that isn’t (namely, the observing scientist in the case of starlings, and a player’s televisual and oscillatory embodiments in the case of professional sport).

Crucially, though, the game does not simply emanate outwards from the athletes’ bodies, because the attunements of the game also come about as recording’s future anteriority playing the sport…and recording too has its murmuring destinies, it’s aphasic transitions: recording doesn’t just seduce the world with its future anteriorities, but is also itself lured by the possible trajectories that unfold from the infolding of these. Ipso facto. QED.

David Cecchetto is Associate Professor of Critical Digital Theory in the Department of Humanities at York University in Toronto, where he also supervises in several graduate programs. David has published widely, including the 2013 monograph Humanesis: Sound and Technological Posthumanism (University of Minnesota Press) and, in 2017, the collectively authored Ludic Dreaming: How to Listen Away From Contemporary Technoculture (Bloomsbury Academic). He recently edited the para-academic collection Phono-fictions and Other Felt Thoughts (Noxious Sector Press, 2016), and has presented creative work internationally.

This presentation proposes the idea of the trickster figure as a way to account for the shifting material, and cultural properties of carbon in the cultural politics of climate change. Combining scientific understandings of allotropy in chemistry – describing the property of certain elements to manifest in various highly diverse forms – and the insights of Caribbean trickster stories, trickster carbon presents novel understandings of the multiple workings and effects of carbon as a material and cultural element. Rather than granting ‘carbon’ a singular seemingly-scientific meaning or reducing carbon to a singular problem that master human agents can ever definitively trap or sequester, this notion allows us to view carbon’s unique ability to shape-shift in a variety of contexts and for myriad agendas. Understanding carbon in this way enables both a critique of the ways in which carbon is mobilized in practice as a profit-generating tool of colonial capture and also a generative opening for understanding carbon’s potential as a connector to more transformative associations and postcolonial politics. As an ambivalent and paradoxical figure, trickster carbon offers a powerful method of cultural way-finding through the urgent concern of climate change.

Anita Girvan is an Assistant Teaching Professor of Political Ecology in the School of Environmental Studies at the University of Victoria on Lekwungen and WSÁNEĆ Territories. Her work takes up the role of metaphors and stories in the cultural politics of climate change. Anita’s particular interest centres postcolonial and decolonial epistemologies that compose larger-than-human relations and politics within the concerns of climate change. She is the author of Carbon Footprints as Cultural-Ecological Metaphors (Routledge 2017), which emerged out of her doctoral dissertation in the Cultural, Social, Political Thought concentration at UVic.

Participants will experience the benefits of devices meant to lighten the burden of the mundane.
Natali Leduc creates objects and situations as solutions to real and imaginary problems, with a fondness for interactive contraptions and performances. Her work romanticizes the archetype of the amateur inventor, who works with rudimentary knowledge and avid curiosity. Mostly impractical, it alludes to needs or desires pertaining to the imaginary realm, where humor and absurdity start to make sense, where they become pure joy. 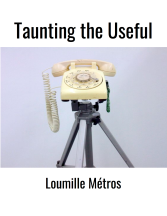 The Uselessness of Theory (with Natali Leduc)

To have a theory without use is to have an intransitive theory. What’s more, it might have a genitive and a dative, an ablative and a vocative — what Benveniste calls a “middle voice” where the subject does something that is done to them: theorizing is accomplishing something in the genitive while doing so datively and ablatively. The uselessness of theory is a theory for uselessness.

Loumille Métros is writing an experimental book called Taunting the Useful, which is made up of 144 short chapters arranged according to four number sequences, all dealing with the history, theory and experience of the aesthetics of uselessness.

ex post facto ex ante (or, it’s all in the set up)

“Ex post facto ex ante” is a spurious reverie on thinking about thinking and its event of its (non)event. In other words, it’s a real ideas lacker.

Eldritch Priest writes on sonic culture, experimental aesthetics and the philosophy of experience from a ’pataphysical perspective. He is Assistant Professor in the School for the Contemporary Arts at Simon Fraser University. Eldritch is also a composer and improviser as well as a member the experimental theory group “The Occulture.”

How does archival work in Science and Technology Studies (STS) benefit from prototyping its objects of inquiry? This talk responds to that very question by way of the reading optophone, an early 20th-century translation device (inkprint to audible tones) that informs present-day optical character recognition (OCR) techniques used by Google Books, the Internet Archive, and thousands of other search-based initiatives. I demonstrate how prototyping “obsolete” reading instruments shapes interpretations of the optophonics archive, with particular attention to the oft-ignored centrality of disability in early OCR experiments and thus in today’s routine text searches. (Research conducted with Tiffany Chan at UVic and Mara Mills at NYU.)

Jentery Sayers is Associate Professor of English and CSPT at the University of Victoria. He’s the editor of Making Things and Drawing Boundaries (University of Minnesota Press) and The Routledge Companion to Media Studies and Digital Humanities.

Amy Tang is a PhD candidate in English at the University of Victoria.